My mom, dancer and sleuth

One day when my mom was in her 90s she looked at the bearded guy standing next to her and asked, “How old are you?”

That was 20 years ago. It was one of the times she said that we had switched roles and she had become the child needing care. I had heard this comment many times. My mother had a talent for repeating herself day after day and year after year. It is a notoriously inheritable talent. I thought, but did not say, that elderly folks whose strength shrinks while their health needs explode are not like children. Children grow up, becoming less dependent as they get older.

My mom was generous and friendly. She loved to dance and she was a garden club enthusiast. She was a department store sleuth, a nightmare for shoplifters. Later, in her 70s, she dispatched trucks for charity pickups. She outlived three husbands. Her cooking was pretty good even during World War 2 food rationing when her specialty was boiled beef heart.

Her daughter-in-law, Sally, Sally’s brother Frank, church friends and neighbors took her to visit doctors, to lunch, to the hair salon, and talked with her. She was 95 when she died as quietly as the sleeping child she thought she had become.

Now that I’m 90 years old, my skin resembles a relief map of Hawaii, volcanoes and beaches included. My days are busy. I spend part of the day putting my socks on. I spend more of it changing my clothes, which wakes up one or two muscles, former muscles and jagged joints.

But first there’s steaming coffee brewed and delivered by my daughter or son-in-law or a grandchild. My meals are prepared, my mail sorted, my fabrics laundered, my Amazon packages brought indoors. I’m supported all the time by sons and daughters-in-law and by my grandson out West, with visits, emails, phone calls and whatever. Friends know that my slights and slips are unintentional, and they are giving of friendship while forgiving of faults.

I don’t like to boast about my disease, but it is almost probably rarer than anything you may have. It inspired the movie “Honey I Shrunk My Brain.” I was originally diagnosed with olivopontocerebellar atrophy, but it became so popular as a computer password that the name was changed to multiple system atrophy. It strikes its victims in a variety of ways. There is no cure. I can still push my rollator the distance from our front door to the curbside mail box. I leave the house to see the doc or the dentist. The floors and sidewalks are swaying everywhere.

Family and friends are gifts from the Eternal, a dizzily cheerful thought. 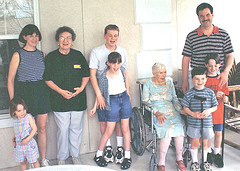 Doris Olmstead Wall Matas Veytia, 95, is in her wheelchair enjoying Easter 1999 with, from left, Katie and Dr. Marie Veldman, Sally Wall, Dan and Kristen Veldman, Great Grandma herself, then Matt, Mike and Dr. Mark Veldman. Grandson John Wall and his wife Pam Heyda, and grandson David Wall, his wife Toni and their son Jacob, were at home, thousands of miles to the west.
Posted by Arthur at 9:30 AM