Who's thinking about Henry Ford? 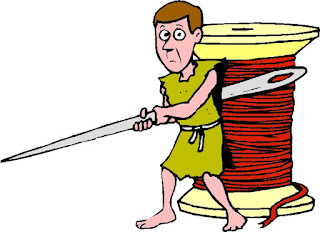 Honey, I shrunk the kids brain!

Friends tell me that God has a plan, but I’m not so sure. God’s spontaneity hints that all plans are subject to change. People turn to God for solutions. Maybe that is not God’s plan. The willingness of God to reply to prayer with the certainty of a bank’s cash machine is told in the book of God that has shaped Western ideas and ideals.

A listener flicks the radio on without thinking of Marconi. Another hops into a car and drives to work without recourse to Henry Ford, and images of the Wright brothers are surely outnumbered by images of Jesus, Mary or maybe the Buddha when passengers settle down for a long flight.

The notion of God as creator, inventor or developer leads to another notion, that God is available 24/7 to grant prayerful requests. Requests for a new radio aren’t sent to Marconi. The Wrights are not invoked to fix airborne wrongs.

As soon as I learned to read, a Bible story book with grand pictures of David and his slingshot and other excitements was on a table next to my bed. Bibles have been within easy reach ever since, including my favorite, the New Revised Standard Version, in print and on Kindle. What I was taught about scripture in 1929 gave me a living foundation, and appreciation of ongoing scholarship. In 1929 I learned what was commonly known about the Bible, even as I also learned how to assemble a crystal radio and how to enjoy the rumble seat in my Aunt Addie’s coupe.

I was born with all of the parts God planned for baby boys. We humans have evolved slowly. We have a lot more evolution ahead if we’re to understand God. Atheists have given up on this. They wonder why God wouldn’t have started people out with brains prestuffed, as the marketers might say, with everything required to understand the divine. I wonder, too, and meanwhile enjoy the encounters God thinks I can handle. Kids curled up on their kindergarten sleeping rugs don’t even know what there is to know.

They will find out that if God has a plan, it will not be the same for each of them. Some will be born in lands of rice, some in places of wheat and corn, others maybe among coconuts and oranges, some of one race, some of another, some sick and some well, some into wealthy families and some will be poor. They will hear that all men are created equal. It will be true only where theory has been given the power of law.

Not so long ago there were no bumper stickers because automobiles had not been invented, but posters and pamphlets announced that God is good, God is love, two claims found in all religions if you look carefully. God frees people from being automatons, mere consumers acting out a placid puppetry, and lets them figure out how to deal with matters of health, joblessness, hunger, warfare, humor, family, religion, education and art. God offers to forgive the errors of folks who also forgive. That catches my attention, and the attention of others who also are error-prone. God is known as Mind, Love, Father/Mother, Holy One, Holy Trinity, the Word and as other words of wonder.

Maybe people are turned loose to work out their own lives, whatever their gifts and misfortunes. Humankind need not feel embarrassed because there’s such a big hole in understanding the patterns of life. After all, black holes are a shifting challenge to the brains of the brainiest among us.

That category does not include the brain I have, because I have a disease called multiple system atrophy (MSA). It causes atrophy, or shrinking, of the brain.

I’m one of the lucky ones, still telling about my diagnosis a dozen years after my neurologist gave it a name. Luck is sometimes lucky, sometimes not so lucky. Here in Illinois, where I live, a State Lottery winner of any prize greater than $25,000 is given an IOU. The legislature of this financially suicidal state has not approved a budget, and the treasurer cannot write big checks.

As a 90-year-old MSA patient I try to avoid unlucky falling, choking, mumbling and the like.

A lot of effort has gone into the study of multiple system atrophy since an online support group was established by the Vanderbilt Autonomic Dysfunction Center in 1995. Several dedicated, knowledgeable volunteers lead the support group. Two who are best-known as moderators are:

Is your calendar within reach? October 3 is World MSA Day. You can make a world of difference.

Ed, you offer insight on so many levels. I cannot help but zero in on this nugget: "Here in Illinois, where I live, a State Lottery winner of any prize greater than $25,000 is given an IOU. The legislature of this financially suicidal state has not approved a budget, and the treasurer cannot write big checks."

Now that's an anecdote for the state of our world.