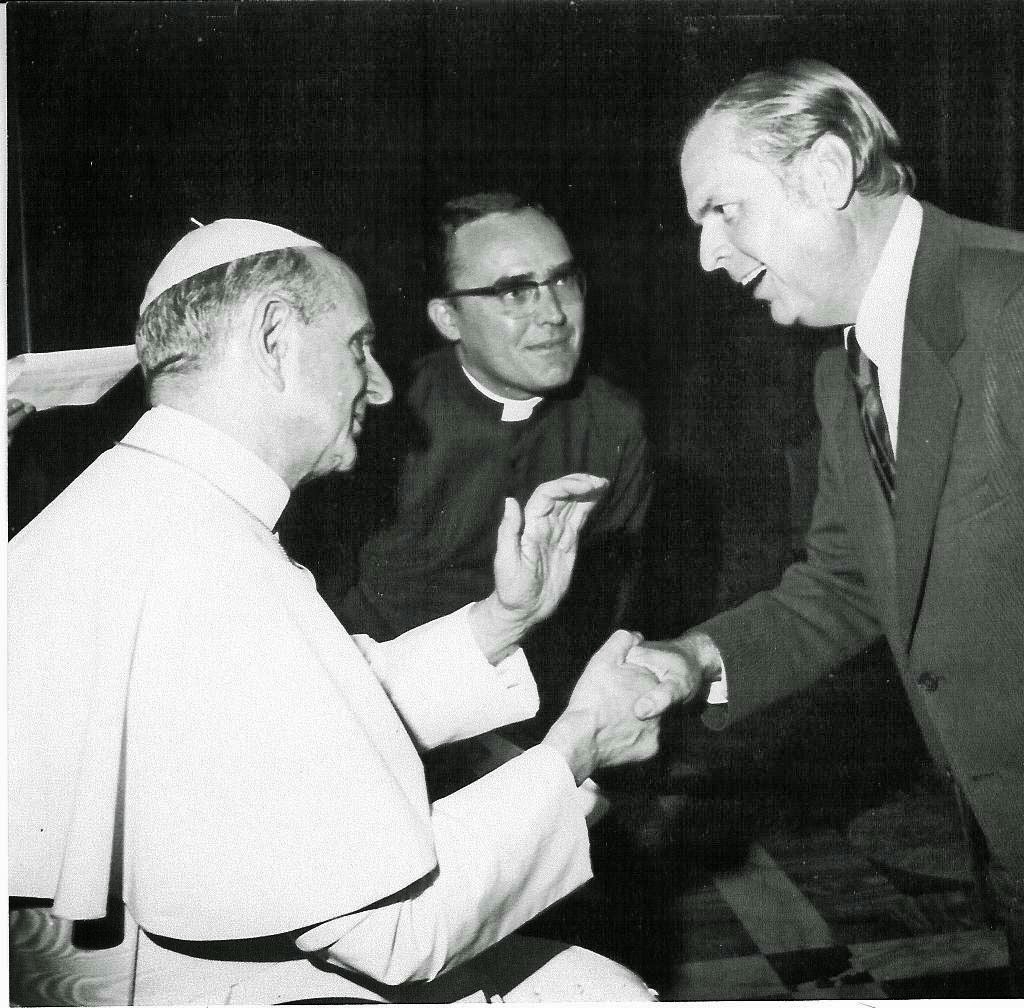 My wife and I were admiring  Michelangelo’s celebration of pity and compassion, his marble sculpture of the most favored of moms caressing her dead son, just inside the doors of St. Peter’s. In an instant we were ducking back from a swaying sedia  gestatoria, man-powered predecessor of the horsepower Popemobile. Pope Paul VI was aboard this Vatican sedan chair.  It was close, but Sally and I were spared the embarrassment of being sideswiped by a chair.

Many journalists did not like Paul VI. I did like him, even though I did not like Humanae Vitae, his controversial  encyclical on human sexuality. I had served on what Lawrence Cardinal Shehan called the Abortion Committee. Other members included highly regarded experts in theology and medicine.  Our job was to explore the issues with Cardinal Shehan, who was a member of the committee appointed by the Pope to advise him before the encyclical was written.

I learned later that Cardinal Shehan had voted against the position taken by Paul VI, as had a majority of the committee. The encyclical stopped the church pendulum on its way up.

Cardinals are still stressed by human life concerns, as they revealed during  the October synod in Rome. They disagreed on matters of marriage and divorce, which none of them has experienced, and matters affecting gay life for Catholics, which if experienced would be in academic terms of celibacy, chastity and abstention.

The struggle for wisdom is constant. The cardinals and the pope certainly prayed daily for understanding, for knowing how to apply God’s mercy and justice. This was time for the beatification of Pope Paul VI, the saintly pontiff who years before had denied Italian newspaper reports that his personal views of homosexuality were inconsistent with church teaching. Popes, like presidents, are respected by many and despised by haters. “All  the world is full of suffering,” said Helen Keller. “It is also full of overcoming.”

I am eligible to place a Disabled marker on my car. The catch is that the disability that entitles me to the parking  spaces prevents me, along with my high regard for pedestrians, from driving a car. This devaluation of my driver’s license occurred in the fourth year of a progressive disease coveted only by spelling bee hosts.

“The whole Christian life,” said the progressive Thomas Merton, “is a life in which the further a person progresses, the more he has to depend directly on God. The more we progress, the less we are self-sufficient. The more we progress, the poorer we get so that the man who has progressed most, is totally poor—he has to depend directly on God. He’s got nothing left in himself.”
The same amazing Thomas Merton also said, “The very contradictions in my life are in some ways signs of God’s mercy to me.”

Suffering is one of the favorite topics in the Bible and on television shows of all sorts, hospital shows, shooting and siren shows, painful pratfall shows, sports bone-crunching shows and of course the news shows, where facts can be smashed and enriched with sound effects.

Pope John Paul II wrote about it in an apostolic letter, Salvifici Doloris (On the Christian Meaning of Human Suffering).  He said, “We could say that suffering…is present in order to unleash love in the human person…”
It is easy to cause suffering, and many defy Christ by harming others on purpose, by confounding  trespasses instead of forgiving them as Someone suggests in a famous prayer. Suffering is part of every human experience, but causing it in anger or carelessness is to pound a nail into real flesh. My own sledgehammer always misses the nail and nails me in the foot.

Elsewhere in his letter John Paul II wrote, “…in suffering there is concealed a particular power that draws a person interiorly close to Christ, a special grace. To this grace many saints, such as St. Francis of Assisi, St. Ignatius of Loyola, and others, owe their profound conversion. A result of such a conversion is not only that the individual discovers the salvific meaning of suffering but above all that he becomes a completely new person.”

I’m a Catholic Christian, even though a fundamentalist pal says there’s no such thing, and I have many Buddhist friends who seek Nirvana. Most of my Buddhist friends are smarter than I am in one important respect. They stayed in Hawaii.

-----------
Second letter of St. Paul to the Corinthians, NRSV, Chapter 11: Verse 16 I repeat, let no one think me foolish; but even if you do, accept me as a fool, so that I too may boast a little. 17* (What I am saying I say not with the Lord's authority but as a fool, in this boastful confidence; 18 since many boast of worldly things, I too will boast.) 19* For you gladly bear with fools, being wise yourselves! 20 For you bear it if a man makes slaves of you, or preys upon you, or takes advantage of you, or puts on airs, or strikes you in the face. 21 To my shame, I must say, we were too weak for that!