Should priests be both dad and father? 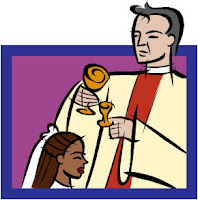 My grandma used to tell me about the time General Grant spoke to her Uncle Ben on the battlefield. “Stand back, Benjamin, and let your gun cool.” She laughed when she told that story. She remembered stories about the family traveling by covered wagon from New England to a new home out west, in Le Roy, N.Y.

As a little kid I liked hearing her accounts of friendly Indians, of making soap, and of the casual sale of powerful drugs in the unregulated pharmacies of that time.

Attitudes change. History wins some and loses some. Those drugs are regulated now, but they are selling more briskly in alleys and neighborhoods than ever before. When I started high school at the end of the 1930s there were virtually no dealers. I was editor of the school paper. I never saw a police officer at the school. I never heard of bikes being stolen or anyone assaulted. It was a simpler time. World War II had not happened yet.

I knew that God liked me when I landed a job as a copy boy on the morning paper. When the war began, and the draft swept young reporters into the army, I was promoted to full-time reporter by my 18th birthday. My favorite beat was called night police, but I covered education, a college dropout unconscious of the irony, along with something called general assignments. I was even assigned to the copy desk, where I quickly learned to edit stories, write headlines, lay out pages and play blackjack.

Old-timers welcomed me into the late-night gambling in the news room. When I was 17 I was included in parties at the homes of reporters. After my first party, the hostess complained that I didn’t drink. She didn’t like the idea that a kid would remember everything the next day.

When I began the job I was a naïve product of a Victorian home, a calm school and lots of religion. I’d never smoked or had a drink. That’s who I was when a shapely woman reporter invited me to her home after we finished work, and it was there that she showed me the painting of herself, dressed for the shower.

He explained that the paper’s policy was to publish nothing about the arrest of priests accused of committing “crimes against nature.” Anyone else could be named.

It couldn’t happen in 2011. Offering a teenager drinks, making sexual overtures, teaching him to play blackjack for money, would get newspaper staffers fired today. And no daily still protects priests. Not so almost 70 years ago.

Attitudes began to change in a hurry for Catholics closer to 50 years ago, when the enthusiasm of Vatican Council II opened church windows to modern breezes. I became editor of The Catholic Review in Baltimore in 1965. It was an exciting period. Bishop Joseph Bernardin—later the cardinal archbishop of Chicago—was general secretary of the conference of bishops in Washington, D.C. He asked me to resign as managing editor of The Honolulu Advertiser to become director, and the first editor-in-chief, of the National Catholic News Service.

My assignment was to reverse financial losses, along with a loss of clients, and simultaneously to convert the daily mimeograph-and-mail operation into an authentic wire service. In the course of that I became president of the International Federation of Catholic News Agencies, which gave me an opportunity to work with Catholic journalists from many parts of the world.

Most of my friends are clergy. It’s been that way for 50 years. Sally, my late wife, knew precisely how Cardinal Lawrence Shehan liked his leg of lamb and how Columban Father John Loftus liked his lamb stew. She cooked for Bernardin and Avery Dulles, for Donald Wuerl long before he became the cardinal archbishop of Washington, for Jesuit Father Thurston Davis and often for scripture scholar Raymond Brown, S.S. There were pastors, seminarians, missionaries, educators and of course journalists at our table, with lots of conversation.

One priest was so attracted to our son during dinner that Sally and I were stunned. The good news is that our son had no idea what the friendly dinner guest had in mind. The bad news is that we didn’t speak up. We didn’t think we could jeopardize a man’s vocation when we had only our parental hunches, and no evidence. It could be frustrating, even risky, to speak up in the 1970s. The unwritten policy was to avoid embarrassment. And nobody wanted to turn in an acquaintance. Some called it tattling.

Most of the sexually active clergy Sally and I knew — whether cardinals or newly-ordained, whether in an American parish or the apparatus of the Vatican, whether gay or straight — were on good behavior. They might have been more comfortable spiritually if celibacy had been optional.

But celibacy siphons off a priest’s sense of family responsibility and all of the priest’s energies can be claimed by the church. And one other thing: The unmarried priest doesn’t have to be paid enough to cover a family’s groceries, clothes, vacations, orthodontists, health insurance and Sunday envelope offerings.

The imposition of celibacy requires men to shun God’s singularly beautiful gift, and deprives the Catholic world of children born with a valuable inheritance.

Celibacy doesn’t work, and evidence of its failures are found wherever priests become convicts, wherever church treasure becomes payouts to victims and their lawyers.

Priests are extraordinary men, offering themselves fully to God and humankind. Humanity is not well served by diminished respect for priesthood.

Whether standing back to let your Civil War musket cool off, or evading workplace predators when you’re a kid, or praying for the human rights of Catholic priests to be both dad and father, everyone has a choice, even if the choice is not to choose.
Posted by Arthur at 6:20 AM