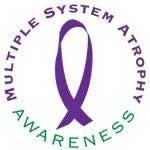 Hang on, because March is something you never heard of. It is Multiple System Atrophy Awareness Month. That may sound like a computer disease, but it is all too human.

Ataxia is a hidden tax on human life.

Atrophy is a trophy to crashed human drives, and scientists are still looking for ways to reboot.

Multiple System Atrophy (MSA) is also known as olivopontocerebellar atrophy (OPCA), an incurable neurological ailment, a form of Parkinsonism. I was diagnosed with OPCA nearly a decade ago. It is called a progressive disease. It keeps going, nibbling at a person’s ability to walk and talk, among other things.

Here’s the media announcement prepared through the volunteer leadership of Pam Bower of Halifax, Nova Scotia, and other members of a online MSA group.

There are no Hollywood celebrities linked to MSA (Multiple System Atrophy)—just more than 2,300 fans known on Facebook as “Miracles for MSA,” whose goal is to draw attention to this rare, currently incurable disease. With that in mind, this group has designated March as Multiple System Atrophy Awareness Month, in order to increase public awareness and encourage research activities worldwide.

Multiple System Atrophy is a neurodegenerative disorder that affects many of the autonomic body systems that people take for granted. The symptoms can occur in any combination, from loss of balance and coordination, fainting and dizziness due to severely low blood pressure, bladder and bowel issues, speech and swallowing difficulties, sleep disturbances, breathing problems, and rigidity and tremors similar to Parkinson’s disease or ALS.

“We all worked hard in our jobs and now we have to work hard to keep ahead of this disease that destroys,” said MSA patient Gene Rechsteiner, of Bakersfield, California. “My hopes are to bring awareness and educate people on how bad MSA is and finding funds for research to find a cure. The medical society needs to realize that for each MSA patient, there are at least a dozen doctors in different fields that will be treating that patient: Primary, neurology, urology, speech, PT, OT, pulmonology, fitness trainer, caregivers, just to name a few. MSA sucks. You lose your independence along with your health. There are only a couple of hours in the day that I am able to function safely. The rest of the day I have to nap, watch my blood pressure. MSA took my career. We cannot stay safely in our home. And now it is eating into our retirement. My wife no longer works in order to care for me 24/7. But we cannot give up hope.”

Previously known by such names as Shy-Drager Syndrome, sporadic olivopontocerebellar atrophy and striatonigral degeneration, MSA is not considered to be hereditary. It generally affects middle-aged men and women, advancing rapidly, with progressive loss of motor skills, eventual confinement to bed, and death. It is very rare for someone to live 15 years with MSA. There is no remission from the disease and currently no cure. The current lack of awareness of MSA leads to misdiagnosis and mistreatment, as well as misdirected research funding that could be better applied to the MSA effort.

Approximately 50,000 Americans are now reported to have MSA (possibly more). A recent epidemiological survey, reported on the European MSA Study group website, has found MSA to have a prevalence rate of 4.4 people per 100,000.

Those are the clinical facts of MSA. But they don’t begin to address the havoc the disease wreaks not only on patients but also on family members, caregivers and friends, who watch their once vibrant loved one gradually lose all those abilities once taken for granted. It is the goal of all those who have been affected in some way by this disease to draw attention to it, not only during March but also throughout the year.

“Novel research to diagnose this debilitating illness sooner and to separate it from Parkinson’s and other disease is critical for creating a better future for MSA patients,” said Dr. Anna Langerveld, who owns Genemarkers of Kalamazoo, MI. “An important first step was taken in 2009 with a pilot study to define a genetic signature of MSA in patient blood samples. The initial work was a collaboration between Genemarkers, Dr. Charles Ide of Western Michigan University and Dr. David Robertson of Vanderbilt University Medical School. Efforts have begun to design and fund a new study to extend and improve these findings. Success will require continued scientific and financial participation from all interested groups. Our passion and the data generated in the ongoing work will expand awareness of MSA, draw more scientists and physicians into our efforts, and begin to bring hope to MSA patients and caregivers.”
For more information on Multiple System Atrophy, including links to MSA organizations and research groups worldwide please visit http://www.msaawareness.org/.

My husband is 49 years old and will be going to a nursing home on Saturday because of MSA. Life is totally changed and roles become reversed. This disease is horrible and I empathize with anyone who is going through it.

Thank you so much for blogging on this disease. The more information out there the more likely funds can be raised for research. Many of us have been touched by this nightmare and appreciate your efforts.

My husband started having symptoms of this disease when he was just 35. It only took 5 years for him to succumb to it. At the time there was no diagnosis for it, it was 1988. Finally we got a diagnosis from University of Michigan. Thank you for helping bring the story of this terrible disease to the public.

Hi, this weekend is fastidious in support of me, since this time i am
reading this enormous educational article here at my home.

Here is my homepage: naperville homes

HOW I GOT CURED FROM MULTIPLE SYSTEM ATROPHY DISEASE..
My name is Robert Williams, I thought i should share this here as someone may need this information; I was diagnosed of Multiple system Atrophy in February 2013, my doctor told me it has no permanent cure, i was given some medications to ease the situation, this continued till a friend of mine told me about Dr Odi from Africa who cured her father of Multiple System Atrophy disease and Glaucoma. I contacted this herbal doctor and bought the herbal medicine from him, i received it within 6 days and applied it as prescribed and was totally cured within 19 days of usage. my life is back again! Contact this herbal doctor via his email oyeyetemple@gmail.com or call +2348115531558

I was diagnosed in November 2007 with Parkinson's Disease. I have left side tremors, balance and gait issues and some non-motor symptoms:  quiet voice, some cognitive decline, small handwriting. I am currently on Sinemet for tremors and Cymbalta for neuropathy related to diabetes and previous chemotherapy. It was on my 25th anniversary of surviving breast cancer that I got the PD diagnosis. I am 69, retired, single woman sharing a house with my sister.  I like to read, quilt, and crochet. I have been reading up on PD.  Until I read too much and it scares me.  Then I put it away until I calm down and can research it some more. I need advice and some direction. I searched further, visited Parkinson’s websites, blogs. I find info about someone having the same symptoms. I was really determined. Fortunately for me, I stumbled on a testimony of someone who had Parkinson’s for several years and was cured through Herbal medication. I read awesome stories of people whose condition were worse. I was not a fan of Herbal Medication, because I once believed that they have not researched it enough. But due to numerous testimonies  I was more than willing to try it…. I contacted  Dr. Fabien, and I purchased the medicine and used just the way doctor instructed. Its a thing of joy to come back and make my review.. It became a miracle for me within 7 months. The herbal medication worked without any trace of side effects on I’m…. totally free. I have been cured for Parkinson’s. I was a shocking experience with the medicine. I never knew I will be free for Parkinson’s disease.  Email dr.fabiencontantin@gmail.com or www.kunimeherbs.com