Wisdom of the Aged made simple 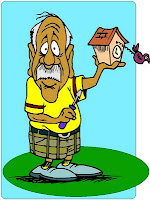 Radio talk shows are credited with inventing the seven-second delay in broadcasting comments by callers who might be creative in the use of license-busting words of four letters and up. Actually this emulates the long-standing seven-second delay in what is said to an octogenarian and the moment the octogenarian hears it, sometimes called the in-one-ear-out-the-other syndrome. That’s why you know so few 80-year-olds named Speedy.
Posted by Arthur at 10:27 AM