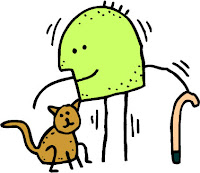 Sometime after her 80th birthday my mom asked for help with a questionnaire. The blanks she wanted to fill in were blurry and her reading glasses no longer helped. She said she had become the child and her son had become the helpful parent. In fact, little kids are just starting to grow, learn and become self-sufficient, but the elderly have stopped growing, are becoming forgetful and need help with things they’ve taken for granted. It is a time of remembered independence and unsettling dependence.

My older friends, even those who have the same medical concerns that I have, are different from me and each other, even as we all adjust to a world of canes, wheelchairs and pills.

Several times a week I trade emails with a girl I knew in high school. We were in the same graduating class in the peaceful days before Pearl Harbor. I was in touch with several boys I knew as far back as kindergarten and one by one they disappeared, all of them. I treasure other friendships, some recent and some going back a long way.
My greatest blessing is my children and their spouses, and grandchildren. I don’t really think of them that way—as a group. Each one is precious and personal.

For all blessings I thank God, who is said to be the same now and forever, but who doesn’t seem the same as when we were introduced in the late 1920’s. When I was four years old I went to bed wondering what God was writing down about my day. It had been explained in Sunday school that God recorded every jot and tittle.

Eighty years later I go to bed after reading my Kindle, not expecting that God is noting that I broke a coffee carafe this morning. I have some inquiries of my own, such as how come there are so many wars and so many hungry people and so much sickness? Maybe that’s because I’m a journalist, always ready to uncap my fountain pen and write down what I see and hear. Even when God answers one of my questions I know there’s no point in trying to get it past the city editor.

Almost everybody offers help. It is almost impossible for someone with a walker to open a door. Someone leaps ahead and holds it open. Everybody who uses a walker in public is treated like a cardinal or a rock star, for whom all doors are opened. Neighbors offer rides, share friendship, shovel snow, carry packages, phone reminders that the garage door is still open.

There are lots of jokes about getting old, because old people can be funny, and not just when they shuffle like comedian Charlie Chaplin or when they blunder blindly like Mr. Magoo. There are wisecracks about wasting youth on the young, who don’t appreciate it, and about old age not being for sissies. But stresses begin at birth, not on the day Social Security checks begin.

Babies are cute, but grandma doesn’t have to be burped.
Posted by Arthur at 5:45 AM