Coming clean about grime and punishment 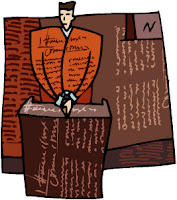 Words were a pleasure the Victorians could display in public, an exercise of pure mind rather than impure limbs. Thus countless letters concluded with the words Your obedient servant, signed with whatever flourish could be managed without blotting the watery ink.

When I question my brain I’m always the obedient servant, obeying brain’s directions because I have no choice. Brain is in charge. It originates or vetoes all decisions. It doesn’t appear to think about them. The heart beats, a wound bleeds, the eyes blink, a lie is told, forbidden chocolate is swallowed, an angry punch is delivered, a smile appears and lunch digests without much of a thought, obedient to the brain and whatever instructions have been carried from brain stem to lower back stern by the body’s own Ma Bell network.

Talking to my brain is not like praying to God. I love God and really want to do God’s will. That requires choices. It is hard to know God’s will about killing people in a just war versus an unjust war, or even about killing prisoners when the robed priests of the judiciary turn their thumbs down versus killings authorized by government secret agents, gang bosses or other practitioners of organized grime.

This problem has been around for a long time

The apostle Paul had a problem with this, too. In his letter to the Romans, chapter 7, verses 19 and 20, he tells it this way: “I do not do the good I want, but the evil I do not want is what I do.

“Now if I do what I do not want, it is no longer I that do it, but sin that dwells within me.”

For Christians, sin is a technical word, the way heart is a technical word for surgeons and something else for Hallmark. Preachers sometimes call for punishing the sin and not the sinner, a view seldom applied to fellow preachers who are sex offenders. Paul once cited deference given to an unknown god, but if there’s an unknown devil its name is Sex, baffling and threatening to believers from the time of Eve. It is a religious mystery, but its experience is denied to the Roman priesthood. It lives on in an undercovers sort of way, especially among the laity. Some look to scientists, some to clergy, for answers.

Believers of all religions and of none feel an urge to live good lives while also, like St. Paul, pondering urges that may be disturbing. Systems of justice have no consistent way to deal with bad behavior beyond punishing the guilty in the same old ways. It doesn’t matter that it doesn’t work.
What does matter is strengthening the search for justice and its lesser-known twin, mercy, particularly in protecting children from sexual violence. Ireland, which not long ago was a model for religious devotions, has imploded in sex scandals of historic concern. The victims were children and most of the accused were priests, brothers and nuns.

These and hundreds of similar crimes are reported day by day, but little is understood about preventing them. Apprehending the perpetrators, who include men and women of every description and occupation, is only a beginning. It should trigger heavy-duty programs to find out what makes otherwise ordinary men and women prey on children, programs comparable to campaigns against AIDS, polio, TB and other threats.

Does anyone choose to be a despised molester of little kids? So how do they get that way? Can they be identified and helped, or will they prey on the young until they’re sent to prison and their victims live on with the horror of it?

All we know for certain is that the prospect of prison does not deter the folks who commit these crimes. That’s not enough to know about this monster behavior.