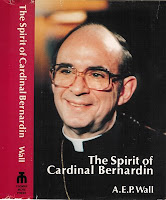 Joseph Cardinal Bernardin accepted the presidential medal of freedom from President Bill Clinton in a September 1996 ceremony. He and the liberal President did not agree on the divisive question of abortion, but each respected the office held by the other.

His successor as cardinal archbishop of Chicago, and as president of the Catholic bishops’ national organization, does not see things that way. Francis Cardinal George, a learned and holy man, has nevertheless denounced the University of Notre Dame’s offer of an honorary degree to the current President of the United States .

Cardinal Bernardin chose not to step onto the political stage. He tried to persuade non-Catholic Americans to agree that abortion is always wrong. He would have been unlikely to show disrespect for the presidential office or to insist that the president’s judgments must conform to Catholic teaching.

Other Americans who are committed to secular government are not enthusiastic about making decisions of the Second Vatican Council, whether concerning abortion or other matters, binding on secular elected officials. In its Constitution on the Church in the Modern World, Vatican II listed abortion and torture among “infamies” and declared that “abortion and infanticide are abominable crimes.”

As a lifelong advocate of protecting the unborn, I hope the Church will become more effective in persuading Catholics and non-Catholics. There is a major political dimension to this effort, and that requires cardinals and others in the Church to avoid the appearance of engaging in partisan politics.

The Church’s challenge to the President and Notre Dame suggests that although he has some reservations about abortion, that’s not a sufficient starting point. It demands total submission to Catholic beliefs.

The absurdity of this is evident in the fact that Catholics are nowhere near total acceptance of church requirements about humility, abortion, the real presence, contraception, the death penalty, just wars, racism, celibacy and the like.
Posted by Arthur at 11:20 AM