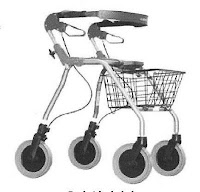 Defensive driving has kept a good many car radiators from losing their cool. It makes motorists something like Boy Scouts, whose famous motto is Be Prepared.

Defensive walking can save hips and lives when it is practiced by people who rely on canes, walkers, rollators and grab bars. Defensive drivers are alert to themselves and others. Defensive walkers are attentive mostly to themselves. Inattention can be the enabler that lets a slip, trip or tumble threaten hips, teeth and skulls.

Neurological ailments sometimes take over in a rush, and sometimes gradually. I was around 50 when I began bumping into things now and then, accumulating bruises and acquiring a walking stick. Like others who worked for a living, I tried not to make a big deal of it. My doctor had no idea what it meant. I was in my 70s before advanced medical knowledge, including new testing possibilities, brought a diagnosis of olivopontocerebellar atrophy, which my neurologist described as a form of Parkinsonism. It is known as OPCA.

By that time I was walking like Charlie Chaplin and learned to use a walker and a rollator, which is a sturdy version of a walker that’s designed for outdoor use, for walking around the block or to a neighbor’s house. I stopped driving when I was 81. It was my huge blessing that my daughter, son-in-law and five of my six grandchildren live a mile away.

Mine, like other neurological disorders, is progressive and does not yet have a cure. It manifests in some oddball ways, such as encouraging me to type hte instead of the. Dizziness and a gait with a mind of its own are constant companions.

Although it is not recognized as a sickness by psychiatrists, compulsive writing infected me long ago. This causes people to become journalists, and to continue telling stories even after they retire. This story is about defensive walking for folks who use canes. Some of the concerns are similar to defensive driving. Here are some lapses:

1. Inattention/distraction/fatigue while walking, whether at home where the terrain is familiar or someplace else. Don’t try to walk around while talking on the phone, or while chatting with somebody nearby but out of sight.

2. Poor lighting. Low-watt night lights make it cheap and easy to help guard against missteps at home. Moving around the house in the dark makes it too easy to trip over an animal or to slip on something the animal has done, or to trip over a misplaced object, maybe a broom or a chair or a shoe. I have night lights in bedrooms, bathrooms, even my living room in case I need to answer the front door or to get outside expeditiously.

3. Not bothering with gadgets. Some head for the bathroom in the middle of the night without reaching for a cane or walker. That’s not smart. After the fall it is too late to remember.

4. Hurrying. Take it easy. If it is an important phone call they’ll leave a message or call back. Don’t rush to the phone, day or night. There have to be speed limits for canes and walkers.

Accidents happen. But there’s no need to cooperate with them, to make it easy for them. They often can be avoided, and there’s only one person who can do it.