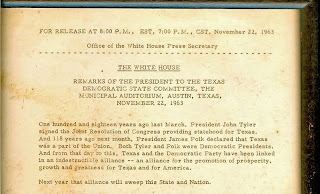 Fifty years ago today the tolling of a bell momentarily paralyzed the news room. It was the bell on the wire service machine. It signaled a rare “Flash,” a designation reserved for the most urgent stories.


The staff of The Honolulu Advertiser didn’t want to believe the report on the wire, that President John F. Kennedy had been fatally shot in Texas.


Three years earlier both Kennedy and his Republican opponent, Richard Nixon, had campaigned in the 50th state of Hawaii. The population was small, but statehood was new, and journalists from all over were happy to dateline their work from Waikiki or Kona. When the votes were counted, 50.03% went to Kennedy and 49.97% to Nixon.
During the campaign I interviewed both candidates when they visited the Big Island, where I was editor of the local daily newspaper. When that heartbreaking flash came on November 22, 1963 I was Sunday editor of the morning paper in Honolulu.


Almost everybody took the assassination personally. Kennedy was a personal president, in the minds of countless Americans.


President Kennedy was scheduled to move on from Dallas to Austin to address the Texas Democratic State Committee. I received the text of that address from the White House, framed it as a minor memento of that terrible time.


The President was not finished. He had planned to speak that night about the linkage of Texas and the Democratic Party in “an indestructible alliance.”


Alas, alliances come and go. Religions come and go, and so governments. But the mystery of human behavior hangs on.