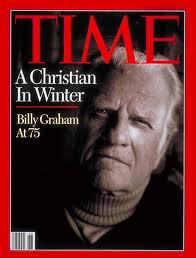 Billy Graham’s decision to buy full-page ads supporting the Republican candidate for president stirred  interest in the role of religion in partisan politics. The ads ran in the Wall Street Journal, USA Today, Chicago Tribune and other newspapers shortly before the election of November 6, 2012—one day before the famed evangelist’s 94th birthday.


The ads backed Mitt Romney in his soon-to-fail campaign to replace Barack Obama as president. This coincided with the removal of Mormonism’s identity as a “cult” in a web site of the Billy Graham Evangelistic Assn.


When Billy Graham gave me  couple of hours for a depth interview in 1965 he radiated the assurance of an evangelist sharing the power of the cross of Christ. We talked in his suite at the Royal Hawaiian in Waikiki, where he was preparing for a week-long Honolulu Crusade. He had recently drawn 2 million New Yorkers to his Crusade in Madison Square Garden.


In those long-ago times he ran a mile and a half every day, played golf, swam at every opportunity. Now he’s at his long-time home at Montreat, near Asheville, N.C., at a cool elevation of 4,000 feet. He was born in Charlotte, N.C., on Nov. 7, 1918, and lived on a small farm. His parents called him Billy-Frank, but at school he chose to be known as Billy Graham.


He has been a widely-circulated newspaper columnist, world-famous author and preacher, confidant of presidents and a noted figure on television. He didn’t need to run those ads.