Once upon a time the GOP... 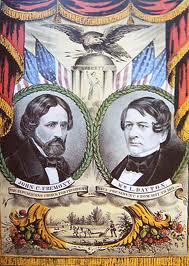 In western New York state my great grandpa, Marcus Kinne, cheered for John C. Fremont, the first presidential candidate of the anti-slavery Republican Party. Fremont lost to James Buchanan in the 1956 election, but Great Grandpa Kinne (Kinney) had a winner next time.

Abraham Lincoln, and Ulysses Grant after him, were talked about as though they were family friends, although they were not, when I was a little kid living with my grandparents. Everybody I knew when I was eight or ten years old in Chautauqua County, N.Y., was a Republican.

Jamestown, my hometown, had been an active station on the underground railroad. It provided many men for the Union army. I saw a few of the Civil War veterans during Fourth of July parades. By then, 1930 or thereabouts, their marching days were only memories and they rode in open cars.

My grandparents and aunts and cousins, enthusiastic members of the party of Lincoln, would be astonished by the 2012 GOP and the social and political elitism celebrated by its presidential candidates.

When I was born the president was Calvin Coolidge. When I was a little kid, Herbert Hoover was president. After that, I became a teenager and Franklin D. Roosevelt lived in the White House. The minimum voting age was 21, so I cast my first president ballot for Harry Truman. By then my grandparents had passed on to a non-partisan realm, and never knew that the child they once nourished grew up to vote for a Democrat. In some respects the two major parties had swapped priorities.

A group has complained that some deceased Jews were baptized by strangers, who were asked to cease and desist. I have no reason to think that my grandparents and their parents have thus been baptized, and I’m certain they would not approve. But if anyone should tamper with those 19th century records, maybe they will be kind enough to change great grandpa’s party affiliation to Democrat, the current party of emancipation and benevolent reconstruction.
Posted by Arthur at 12:06 PM