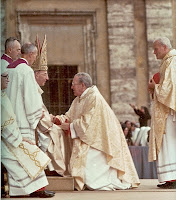 I held my breath while those courageous Chilean miners were squeezed one by one into a narrow tube for an uncertain ascent through solid rock. Tight spaces take my breath away, a claustrophobia that makes a closed MRI tube fearsome.

Tight situations can whip up an instant stampede in the imagination, a confused and reckless response to a jammed elevator or a tightening throat, even a burst of unwelcome memories like a sewer backing up.

Unwelcome memories are being described by victims of clerical abuse all over the world, to the annoyance of some church leaders. Until recently, such things were local. The faithful tended not to believe an accusation if they heard about it. Then came the Internet and cell phones and 24-hour news reports. Suddenly what had seemed local misbehavior was seen to be universal.

Not long after I was named director and the first editor in chief of the National Catholic News Service in 1972, a Catholic bishop was arrested on a drunk driving charge. That kind of news had been too delicate for coverage by a news agency owned by the conference of bishops. I reversed that policy, and the story was reported. There were angry complaints from some bishops and support from others, most notably support from the man who hired me, Bishop (later Cardinal) Joseph Bernardin.

Concealment of bad news was common in the church, as it was in business and government. One prominent Catholic editor said that his slogan was, “When in doubt, leave it out.” Some Catholic journalists saw their role as defending the institution, especially bishops. Others thought the Second Vatican Council triggered different expectations.

I’ve described elsewhere my employment by Cardinal John Cody of Chicago to help him write his autobiography. I interviewed him for hundreds of hours during a time when he was resisting a grand jury inquiry, refusing Vatican requests that he accept a post in the Roman curia or accept a coadjutor archbishop in Chicago, and rolling as the target of investigative reporting by a Chicago daily. It was a stunning, numbing experience to hear Cody threaten to “blow the lid” off the Holy See, where he had worked for years. It was breathtaking to be told that the pope had said Uncle, assuring Cody’s continued silence.

Cody was a product of pre-Vatican II Catholicism, when the common way to approach a bishop was to kiss his ring, when educated Catholics asked a bishop’s permission to read something listed on the Index of prohibited books. A lawsuit filed against the church could bring excommunication. Few Catholics challenged the notion that the church should be protected from scandal. There was little understanding of homosexuality, and priests who fooled around with boys were expected to shape up and ship out to a new assignment.

Most of our dinner guests at that time were priests and bishops. Some were gay, some were not. Few paid too much attention to our children, and when they did my wife and I made sure that nothing developed. We didn’t even consider making a public issue of it. When I was approached, usually during overnight events, I just backed off until Sally and I decided some decades ago that we had an obligation to report one cleric’s behavior. I told a bishop about it. After he had time to check it out, he invited me to meet with him. I felt caught in a whirlwind as the bishop began to speak: “On behalf of the Catholic Church I apologize to you...”

Sally was a leader in a church-sponsored group of gay men, all closet-dwellers in those days. She understood that most of them were attracted to other adults and had no interest in boys. She learned, too, that false accusations could destroy a person’s personal and professional life.

Maybe I was conditioned by my 1940s experience as police reporter for a daily newspaper, whose editor decided that there would be no stories about priests accused of “crimes against nature.”

When I took a course for catechism teachers around 1955, the ordained instructor said that gay penitents in the confessional were routinely forgiven, even when the confessor recognized them as regulars. Attitudes would change in the 1970s and beyond.

For a long time after Cody’s death I thought I would write the book, but not the way Cody had in mind. For one thing, I felt the caution of a reporter who knew that Cody was not given to being inconvenienced by truth. In addition, I liked the Cody who never missed Bob Hope on television, and thought I understood him. He was a pioneer in integrating schools when he was Archbishop of New Orleans. He was an early supporter of programs to help alcoholic priests.

I liked the Cody who encouraged me to buy a condo by writing a personal check as a loan to cover the down payment, but I knew he was not unlike business chiefs who use checkbooks to buy gratitude and influence. He was a sick man, and he denied that, too. His respected public relations counselor once told me that “the problem with Cardinal Cody is that there’s no Mrs. Cody.”

Around the time I turned 85, which was some years after I was diagnosed with a curious form of parkinsonism, I began to gag on memories of behavior and concealment inside the apparatus of the church. This was stirred by a burst of news reports about such events almost everywhere. When I look at my notes I can feel an emotional claustrophobia, a kind of memory choking that has no Heimlich maneuver.

It is the dizzy claustrophobia of OPCA/Multiple System Atrophy that keeps me from going to church, and not the chilling memories. I love the church, the clergy and religious, and many of the sermons. A painful side effect of triggered memories is that some friends misunderstand, thinking it is a rejection of them or of faith. The opposite is true. It is an affirmation of faith no matter what the obstacles may be.

Sometimes I think about those hermits who used to spend their time on top of poles in the desert, and I realize that although it is not my choice, it is okay to be an opca/msa hermit in a pleasant condo with computers, TV sets, radios, books and magazines, a microwave and a freezer, in frequent touch with children and grandchildren while friends include me in their prayers and emails.

I've been given needed time to blue pencil my own life, which like everyone else I began as an amateur, and try to correct some of the mistakes and to seek forgivness for them all. Having this opportunity proves God’s love. And gradual loss of memory proves God's mercy.
Posted by Arthur at 9:21 AM