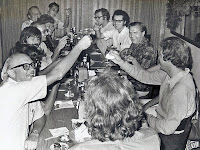 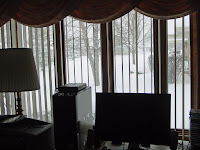 I drove all of the navigable sidewalks on my electric scooter, but the neighborhood just looked empty. When you live alone there are times when you’d like to fill up those empty spaces with human faces. While I was bumping along, watching out for cracks and crevices in the pavement, I thought about a friend I haven’t seen in 70 years. We used to ride our bikes on sidewalks like that.

My wife’s diabetes took her into medical catastrophes as painfully pointless as waterboarding. At the same time I began stumbling and fumbling, courtesy of a neurological short circuit. We sold our house, said goodbye to a quarter century of friends, and moved a thousand miles or so to be close to family. Sally’s diabetes became even more aggressive, she moved to a nursing home, and didn’t live long after that.

Anybody who makes that kind of switch at a certain age, and with a disease that will soon stop him from driving, is lucky to have family and good neighbors nearby. But long-time friends and co-workers are not there. There are no jobs. If the move is into residential suburbia, and long winters, hobbies are savored. God bless computers!

So as I steered my scooter along bike paths and sidewalks my thoughts went from Billy Anderson, my 1930s bicycle pal, to others who put some real happiness and friendship into my life. I became so caught up in it that after I went home I started writing down the names, and picturing the people in my mind.

Some were childhood pals, some were girls I dated 65 or 70 years ago, some were co-workers and a couple of them were wives (but not simultaneously).

This was fun. I tried tracking some of them down via the Internet. I’m ruling out the grouches and remembering a lot of upbeat, smiling people.

This is dandy medicine. It isn’t covered by Medicare, but then, it doesn’t cost anything. It perks up the blood and lightens the feet. It will be a permanent part of my rebuttal when a self-centered mood starts to take shape, the mood that says even the silent monks see other monks, that a cat is good but not always good enough.

There’s no patent on this idea. Just think Rewind, and look for the cheerful voices and grinning faces out of the life you’re living. Call it daydreaming, call it mentalism, call it whatever describes it for you. I call it God’s gift—bigger even than the computer.
Posted by Arthur at 9:31 AM